The demography of employment part 4: the commute. 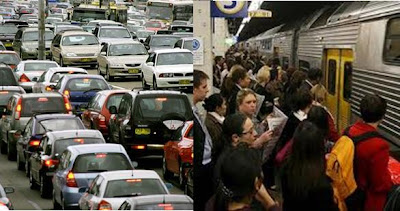 Parts one to three of this series looked at the spatial distribution of work in our major metropolitan centres, and the income profiles of employment based on geography. The findings, simply put, are that between 8 and 9 out of ten of all metropolitan region jobs are in suburban locations (not CBDs). This tends to be widely dispersed at densities up to around 500 jobs per square kilometre, rising to over 2,000 and 3,000 per square kilometre and more in some areas. While the suburbs represent the overwhelming majority of jobs, they also tend to be lower paid than the jobs found in CBDs and inner city areas which can earn on average between 50% and 100% more than suburban jobs. So while the CBDs and inner cities are minority employers, they are employment locations of relative financial privilege, concentrated in small geographic areas.

This instalment looks at how the demography of employment influences the commute. I am again indebted to Urban Economics for their research assistance in pulling these figures together. There aren’t too many questions this company can’t answer, so if these articles raise any particular questions in your mind, please contact Kerriane Bonwick on kerrianne@urbaneconomics.com.au or phone them on (07) 3839 1400.

The top 25 employment locations for public transport use paint a similar picture (click on the table to enlarge): 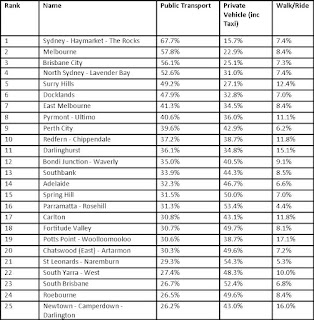 By and large, these are all mainly inner city locations. While the proportions making use of public transport to work in these areas is high, the same areas represent only a minority of 10% to 15% of metropolitan wide jobs. Plus, these are jobs which earn, on average, a great deal more than suburban employment. In short, the highest rates of public transport use are found amongst the minority of workers who earn the most money.

Visually, the picture is stark. The illustration below (taken from a site called ‘Charting Transport’ which is full of useful analysis – this particular illustration is from this article) shows clearly that public transport is typically a mode of choice for CBD and inner city workers and almost of no use to workers in middle or outer suburbs. 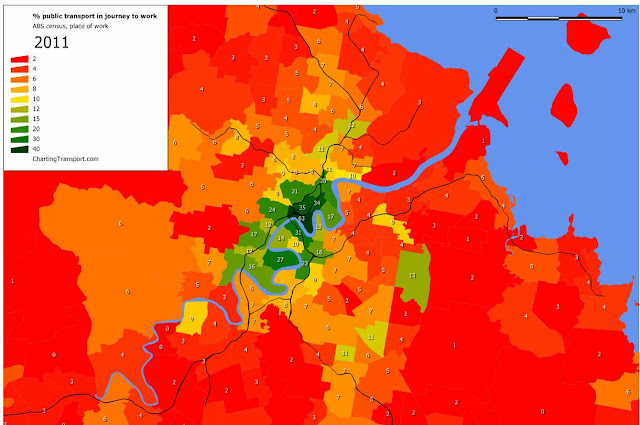 It’s the same pattern repeated across other metropolitan regions. The parts in red or orange are where the majority of workers are, the parts in green where a minority of higher paid workers are.

This point doesn’t need labouring but the implications take some explaining. Public transport systems are heavily subsidised by taxpayers. Yet the highest patronage is amongst the minority of workers who earn the most money. Private transport receives no such subsidy and, as motoring bodies point out, it raises more money through registration fees and fuel taxes than is spent on it. Private transport –namely the car – is the only practical mode of choice for the majority of workers in suburban economies, where they tend to earn less. The reality is that suburban workers on lower incomes with limited access to public transport as an option are subsidising the public transport systems used by inner city workers on higher incomes.

The irony is that governments are under almost relentless pressure to spend more taxpayer dollars on improvements to public transport for the benefit of a higher income minority, and also to keep fares low (and hence maintain or even increase the level of subsidies). The level of policy support for taxpayer funded improvements to metropolitan road networks hasn’t been as generous, with extensions and improvements to metropolitan road systems largely approved on the basis of PPPs where investors believe they can mount a business case (with mixed results).  This is despite the reality that the majority of employment is in suburban locations and that arguably private transport users already pay more in taxes than the road network receives in spending.

Australia is not unique in this regard. Many western economies adopt similar subsidy arrangements. (Many eastern economies have such vastly different levels of population and population density that comparisons aren’t really meaningful). But what is missing in Australia seems to be an awareness of how this subsidy plays out. Public transport users with high paying jobs in inner cities are often the first to complain about incremental increases in fare costs. Private car users with lower paying jobs in suburban locations where public transport is simply not an option, are asked to shoulder rising fuel prices, fuel taxes, registration fees – and even, lately, parking costs in some suburban shopping centres – without much public policy sympathy.

None of this should be taken as a pejorative attack on public transport. This is simply the reality of how people across our metropolitan areas commute to work, and the costs – taxpayer and private funded – involved in making this happen. No one, me included, is seriously proposing a divestment in public transport systems in favour of private. The public transport network is an essential element of our transport system. Without it, our urban workforce mobility collapses. Witness any number of occasions when train or bus networks fail, for whatever reason. Plus, public transport has an important social function by providing low cost transport for work and non-work trips for financially disadvantaged members of society who don’t have access to a private care, elements of our aged population, and for students.

But given the way employment is distributed through our metropolitan areas, is it sensible to suggest that spending even more taxpayer money on public transport is capable of making much difference, without also dealing with the realities of where the jobs are? This will tell us more about the realities of how much of the work related commute can be provided for by public versus private transport. We need to understand the economic and geographic realities better, and hope that the media, the community at large and transport policy groups base their arguments closer to the existing and future patterns of employment distribution.

For example, proposals to increase public transport patronage by imposing congestion charging regimes to punish suburban car commuters are, based on the evidence, entirely doomed to fail. Only a minority of the metropolitan workforce can realistically make use of public transport (mainly those with jobs in CBDs or inner city areas). For the majority of commuters with suburban employment, public transport isn’t an option (and making it one would be even more prohibitive that the costs of the present system). Penalising suburban car commuters thus imposes tax penalties on those least able to afford it for no policy gain. Then there are the proponents of ‘free’ public transport, who might need to explain how providing this service to the highest paid workers in our economy, at the expense of the lowest, stands the test of social equity.

The reality of where jobs are located throughout our metropolitan economies, and the nature of those jobs, should be a starting point for discussions about how to more efficiently manage our transport networks. Unleashing further economic potential in our cities won’t be achieved if the policy discussion is removed from the realities of workplace geography.

This series began with the suggestion that public policy and urban planning has become preoccupied with where we live, and with types of housing choice and form. Little discussion seems to take place about where we work. But where we work, and the nature of those jobs and the demands they make of our urban infrastructure arguably have a larger bearing on urban economic efficiency than housing. I hope these articles have made a few observations about the demography of employment that will promote further thought and discussion – based on realities rather than myth or presumption.

Next and final: the future of employment and how this could re-shape cities.