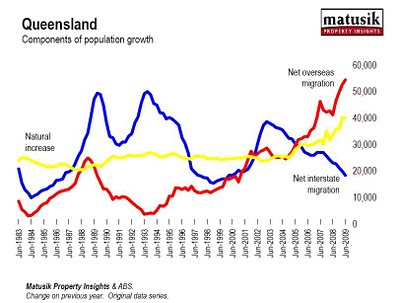 For much of the 1980s, 1990s and early 2000s, ’s population growth was fuelled by net interstate migration. There were more Australian residents leaving and (in the main) bound for , than Queenslanders leaving bound for southern states.

Those interstate migration flows peaked from the late 1980s to mid 1990s, where net figures of up to 50,000 per annum crossed the border to settle in the . That’s when the “1,000 people per week” figure was first aired, and was subsequently flogged by politicians as evidence of ’s economic and lifestyle allure.

At the time, was suffering economic malaise in the aftermath of the Cain-Kirner Government. That prompted many Victorians to uproot themselves, sell their homes and move to . was not in the same economic position (that was to come later) but high housing costs and the lure of the sunbelt saw New South Welshmen compete with Victorians for the title of representing the most new arrivals to .

Those arrivals, contrary to the ‘Gods waiting room’ reputation of retirees moving to the Gold Coast, were typically families in their 30s and 40s – and they brought with them two things important to the economy: capital and skills. They typically had sufficient surplus capital from the sale of their home to buy a better home in , for less money (our housing was then relatively cheap, and state taxes and charges relatively lower) and still have funds left over.

This was a golden era for growth in . Net interstate migration accounted for more than half of ’s population growth. Next was our natural growth rate (births over deaths). Direct overseas migration was the poor cousin of population growth to .

Net interstate migration is no longer the main driver of population growth for . Net interstate migration numbers have fallen to below 20,000 per annum. Baby bonuses and social change have seen our rate of natural growth increase over time, but the big jump in numbers has been direct overseas migration to . Now pumping something like 50,000 people per year (1,000 a week) into the state, direct overseas migration is entirely responsible for maintaining ’s reputation as a population growth state. Contributing three times the number of people as net interstate migration, the composition of overseas arrivals begs a few questions about how that might change the growth landscape.

If interstate arrivals of the 1990s arrived with capital and skills, is it safe to assume that overseas arrivals of today are bringing the same things to the same degree the state’s economy? Probably not.

What the figures tell us.

The graph above paints the picture nicely (and thanks to Michael Matusik for letting me use it). The blue line of interstate migration has been a bit erratic over time, probably reflecting the relative economic appeal of compared to other states. (Does the current decline in net interstate migration to have something to say about the relative appeal of our economy and housing markets? That’s another story again). The red line shows direct overseas net migration, which since the early 2000s has been on a solid rising trend.

(That’s just the net overseas numbers for permanent residents. There’s also a very large population of temporary resident status immigrants in at any one time. Business and working holiday and student visas have added well over 50,000 people to the population at any one time - roughly a city the size of Rockhampton).

Understanding that the mix of population growth has changed in is the first step in predicting future economic, social and housing trends in the state. Ten years ago, the needs of interstate arrivals might have been pretty straightforward to pick. Today, the social, welfare, housing and community needs of direct overseas migrants from the combination of Asian and sub continent countries which is now feeding our population growth paints a different picture.

The fact that their needs and contribution to the economy will be different is without argument. In fact, the Federal Government acknowledged as much in this month’s announcement of major changes to skilled migration entry standards:

“Only half the migrants entering with skills on the MODL (Migration Occupations on Demand List) actually end up employed in their field and one-third end up unemployed or in a low-skill job, Senator Evans said.”

"The current points test puts an overseas student with a short-term vocational qualification gained in ahead of a Harvard-educated environmental scientist," Senator Evans said.

“While 's hospitals need nurses and doctors there are 12,000 foreign cooks waiting to come to under the existing system, he said.

So, if up to a third of overseas arrivals under this scheme end up unemployed or in low skilled jobs, you have a different profile of what’s boosting our population numbers and a different profile on the types and styles and price of housing product in demand, at least in the short and medium term as they become established.

You could suggest that a large proportion of interstate arrivals of the 1990s also arrived without jobs to go to, which could be true. But the anecdotal evidence at least was that they soon found jobs in their chosen field, and had the capital base to enter the housing market with either more equity or a relatively higher standard of housing product than the one they left behind.

The change in the component of population growth to overseas migration is not a bad thing. But it would be wrong to expect these migrants to be bringing with them the same capital, the same skills, the same requirements on social welfare or the same demands on housing as equivalent migrants from interstate did during the mid 1990s.

Housing developers could find that closer study of the population growth numbers in might reveal some very different demand profiles to the ones assumed on the basis of our historic experience. And Governments likewise might need to be prepared for greater demands on social services and a slightly less immediate economic gain from each overseas migrant, compared with the interstate equivalent.

Posted by Ross Elliott at 12:49 PM No comments: