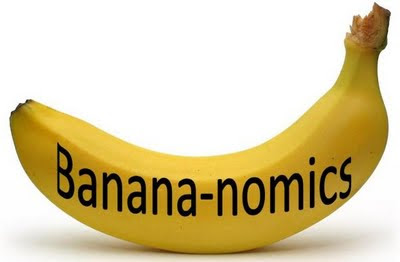 The price of bananas is again making headlines as it pushes up inflation and threatens rising interest rates. But what’s the price of the humble ‘nana got to do with property markets? Plenty.

Banana prices have risen almost 500% since Cyclone Yasi wiped out much of north Queensland’s banana crop earlier this year. The immutable laws of supply and demand dictate that when supply falls relative to demand, prices will rise. Which is what they have done, and as they did a few years ago when the same thing happened after Cyclone Larry. As banana supply was restored, prices fell. As they will again.


Banana prices are a self-evident, every day example of supply and demand at work. They’re the sort of example understood by consumers and even school children with no formal economic training. But clearly the lessons are beyond the capacity of some Australian politicians, most land regulators and many town planners. In the very same way that constraints on supply create scarcity value for every day commodities, constraints on supply and scarcity equate to rising prices for all types of real estate, not just housing.


It starts with misguided planning schemes that aim to direct consumer behaviour and distort their purchasing decisions by limiting choice. This has become commonplace in planning to the point of representing accepted wisdom. One of the most obvious examples has been the continued efforts by some regulators and planning authorities to attack the detached house as a choice – however best suited to the needs of young families – which ‘Australia can no longer afford.’ Like a contemporary version of Stalinist central command, housing choice is distorted via planning schemes that are biased to high density apartments in central locations (that consumers are told is good for society), as opposed to detached housing on the urban boundary (that remains the majority consumer preference). Faced with little choice, more people are forced to choose the option deemed appropriate by higher authorities than themselves, and when this is later reflected in data, the regulators hail this as some sort of fundamental change in consumer preferences. You’re seeing this type of shallow analysis in the media, pushed by various interest groups, on a regular basis now.


An equally significant consequence of using planning ideology to achieve social engineering outcomes has been the impact on prices. In the case of raw land for housing, we have succeeded in the unimaginable – needlessly elevating prices far beyond the reach of average Australians, on the basis that we may run out of land, in a country where land is plentiful. This has been achieved simply by making raw land for detached housing development scarce because permission is not allowed outside artificially drawn urban planning boundaries. (On top of creating scarcity, of course, new land supply is taxed more aggressively than existing supply, via upfront levies. This is no doubt because there are fewer votes at risk in taxing new housing lots as opposed to raising council rates or other broad based revenue measures. Plus, new supply is tied up in a regulatory tangle which now means it can take 5 or 10 years just to get permission to develop land in areas already described as intended for future housing. Go figure).


The proof is readily available. In the Brisbane region, for example, the price of vacant land per metre is now 2.3 times (230%) what is was a decade ago. Established house prices also increased, but at a lower rate – they are 1.5 times (150%) the price a decade ago. Average weekly earnings, just to bring it back to earth, are 0.6 times (60% higher) what they were a decade earlier.


In Melbourne, where supply constraints have been more sensibly managed, land for housing is 1.3 times the price of a decade earlier. Little wonder developers are giving up hope for south east Queensland and focussing their energies in Victoria.


If the fundamentals of supply and demand (let’s call it banana-nomics) are so obvious in the market for new land for housing, where else are they revealing themselves?


Recent reports have noted that Australian retail property rents (a lot like our housing prices) are amongst the highest in the world. Research by CB Richard Ellis suggests that rents in Sydney, Melbourne and Brisbane are higher than the better shopping strips in Los Angeles or Milan. How can this be? Los Angeles County has a population of around 10 million people, some of whom are noted big spenders. Retail demand there would dwarf that of Brisbane’s retail spend.


Once again, the answer lies in supply. LA’s ‘sprawl’ is arguably more about the historically easy dispersion of retail and commercial space along high streets and back roads throughout the metro area, as it is about expanding housing. As LA developed, it was relatively easy to create new retail space, and there is plenty of redundant retail space in older strip areas where secondary traders can operate at low market rents. In Australia, by contrast, planning constraints have been much more onerous. The major retail centres, developed from the 1960s to the late 1990s throughout metropolitan areas largely remain the same major centres we have today. Finding new opportunities for retail expansion is a large hurdle which few clear – protection of the retail hierarchy and existing centres, and preventing a dispersal of retail activity beyond existing areas, is the deliberate intention of urban planning schemes.


The result has been that those with the existing retail centres have paid for, and now own, a precious commodity: the permission to conduct retail activity, with limited threat of competition in that catchment. Our retail rents have grown because retailers – and consumers - have had limited alternative choices. New retail operators have encountered barriers to entry in the form of planning laws and no-compete clauses, once again reinforcing the value of existing permissions. Just ask Aldi or Costco what they think our planning schemes are doing for competition if you don’t believe it.


City carparking is another example of banana-nomics at work. A study by Colliers International reveals that city parking costs in Sydney and Melbourne are more expensive than London, Tokyo or New York. Brisbane came in at 14th most expensive on a global list of 156 central business districts. How can it be? The answer is simply that the anti-car crusade has led to planning policies which deliberately seek to limit CBD parking spaces, in the futile hope that this will somehow force people to abandon the convenience (and frequently the necessity) of private transport in favour of buses or trains.


Those ambitions have never come to much, so regulators then resort to the blunt weapon of taxes – with car parking levies now common in many cities and the prospects of congestion charging for access to CBDs frequently rearing its ugly head. This deliberate attempt to restrict (and then punitively tax) the supply of city parking spaces has the inevitable effect of raising prices.


But there is one fundamental difference between how banana-nomics works for banana growers and property developers. Banana growers can grow more plants and create more supply. The same can’t be said for developers of property. In housing, new supply is likely to remain constrained by growth boundaries and the preference of regulators towards higher and medium density within existing areas. This will create a floor under the cost of new supply which means that prices are unable to fall (they can’t fall below the cost of production). So raw land is unlikely to get much cheaper, unless there are some radical (and many would say much needed) reforms to planning policies around Australia.


The same applies to retail property. Retailers (most recently evidence by Solomon Lew’s Just Group comments about retail rents) may object to high rentals, but they won’t get much option. Major retail centres are where the action is, and the alternative (on-line retail) isn’t sufficiently appealing to the majority of consumers, who get more from their shopping trip than just a retail transaction. New shopping centres won’t be created within existing urban boundaries because planning schemes are unlikely to allow further retail dispersion away from existing centres. In the limited cases where approval is granted, existing centre owners will play hard ball, arguing fervently against the free market (witness Westfield’s objections to a new Aldi Store, approved by Brisbane City Council, north of Brisbane). Their actions are understandable, given they’ve outlaid very large investments that are contingent on the existing planning scheme remaining.

And the same applies to car parking. Unless there’s a monumental shift in policy attitudes to private transport and city car parking, we aren’t going to see multiple new above or below ground public car parks being created in our cities, no matter how much the demand. That will mean prices remain high.
In all cases, it has been the planning regulations that restrict supply and limit choice, not demand, that have been responsible for making our housing, our retail rents, our car parking and so much more, amongst the costliest in the world. And given that those constraints are unlikely to change, you’re unlikely to see that position reverse itself any time soon.
The burning question, of course, is how long can it last? If supply costs elevate prices beyond the capacity or desire to pay, people stop buying. Economies slow down. The music stops.