The demography of employment part 2: where we work. 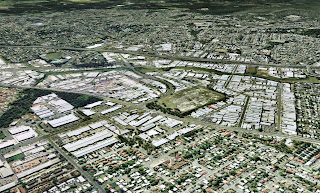 In part one of the Demography of Employment, we looked at the largely suburban nature of employment in Australia’s larger capital cities (Brisbane, Sydney and Melbourne). Typically, the CBDs and the adjoining inner city commercial areas account for only around 13% to 19% of all jobs across the metropolitan regions. Plus, this proportion hasn’t changed in the last decade, and in some cases suburban employment growth has outstripped the inner city. At least four out of five jobs, if not more, are in suburban locations – a fact that receives little attention in discussions about urban growth and planning.

This series tries to bring some more focus to the suburban heartlands of our economy. In this second part, we look at where these conglomerations of jobs are, and what this might say about some of the issues canvassed regularly in the media or in professional forums debating the growth of our cities.

In assembling this information, I am indebted to the team at Urban Economics – an urban research company based in Brisbane – who have methodically ploughed through the official statistics to help paint a picture of our suburban economy. If any of the material that follows leaves you wanting to know more, I suggest you give them a call on (07) 3839 1400 or email Kerriane at kbonwick@urbaneconomics.com.au 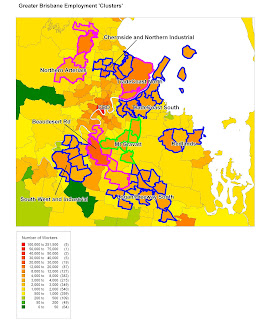 The combined CBD and inner city areas of the Brisbane metro region accounts for around 170,000 jobs, or less than one in five of the region’s 925,000 jobs. The rest of the region’s jobs are dispersed throughout the metropolitan area. Some of this is a ‘salt and pepper’ scattering of jobs in largely dormitory areas, but there are also notable concentrations which, although they don’t in their own right challenge the CBD for its density of employment, constitute in themselves some very large concentrations of economic activity.

One of the largest of these is what we might loosely call the ‘Logan and freeway south’ area, which covers a large expanse of commercial activity to the city’s south and provides a combined 54,806 jobs. Put into perspective, that’s around a third of the CBD and inner city combined. The number of workers per square kilometre averages around 550 in this region, but rises to over 1,300 workers per square kilometre in Underwood.

Also to the south of the city lies a region we might call the south west and industrial – comprising areas like Pallara, Willawong, Carole Park, Wacol, Inala, Darra, Oxley, Jindalee and Seventeen Mile Rocks. This area is home to some 46,000 jobs, at an average of 460 jobs per square kilometre, rising to 1,200 jobs per square kilometre in Carole Park and with Wacol containing over 9,000 jobs alone. This area is roughly equivalent to just over a quarter of the employment in the CBD and inner city.

If you combined these four south side aggregations, and didn’t include the ‘salt and pepper’ scattering of jobs located in other areas on the Southside, you have over 179,000 jobs – which alone is more than the CBD and city fringe.

North of Brisbane there is a large area around Chermside which provides nearly 35,000 jobs. Chermside itself has over 3,500 jobs per square kilometre (most probably explained by its retail concentration) and the area itself over 1,400 jobs per sq.klm.

In addition, there are the northern arterial areas of Strathpine, Brendale, Albany Creek, Lawnton and the Hills District, which contain 21,697 jobs, and further north again are the Moreton Bay areas of Burpengary to Redcliffe which are home to just over 30,000 jobs.
These three north side areas combined account for some 86,000 jobs, or the equivalent of half of the CBD and inner city employment market.

Other aggregations throughout the metro region include the Redlands area (20,426 jobs) and the Trade Coast south area (38,000 jobs) and Trade Coast north area (33,346, including the airport).  Combined, there are 71,436 jobs in the Tradecoast area north and south of the river mouth. 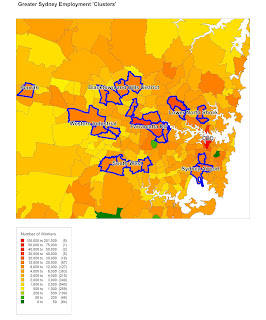 Sydney’s CBD is the base for 13.4% of jobs across metro Sydney. If we include Pyrmont, Ultimo, Potts Point and Woolloomooloo, this rises to just 15.6%.

Beyond the Sydney CBD and inner city lie some very large concentrations of employment – Parramatta perhaps being the most notable. The Parramatta Road area is the daily commute for some 118,182 workers. Not only is this a big number of jobs, but they are closely packed: overall worker density is 2,656 per sq.klm rising to over 5,000 per sq.klm in Parramatta-Rosehill itself.

To the south west of this area lies the western industrial employment region around Wetherill Park. This is home to a further 40,440 jobs.  And then to the north west of Parramatta lies the Blacktown and Hills district with a further 61,880 jobs.

Combined, these three western Sydney employment areas account for some 220,000 jobs. To help with context, this is roughly the same as the 250,000 jobs found in the Sydney CBD, Haymarket and Rocks area. And none of these figures include the ‘salt and pepper’ distribution of jobs found in nearby and adjoining pockets of land which are more residential in nature but which still include a significant number of jobs. For the sake of argument, it is fair to say more people call this large western area of Sydney a workplace than all the people who work in the CBD.

The Sydney north shore is an obviously large concentration of employment. North Sydney and Lavendar Bay have 43,000 jobs alone, at a workforce density of over 22,000 per square kilometre. So densely packed is this 1.9 square kilometre patch of land that it is in effect an extension of the CBD. Nearby are the other lower north shore areas which are home to a further 96,245 jobs. Not surprisingly they are also densely packed, with Macquarie Park at over 3600 per sq.klm, Chatswood at over 4,300 per sq.klm, and St Leonards at 9,364 jobs per sq.klm.

Other areas of metro Sydney which account for some significant numbers include the airport region (52,000 jobs), and the south west (including Bankstown) which is home to over 57,000 jobs.

But in Sydney’s case, nothing quite compares to the western suburbs employment lands for employment scale in terms of rivalling the CBD, albeit over a much larger area. 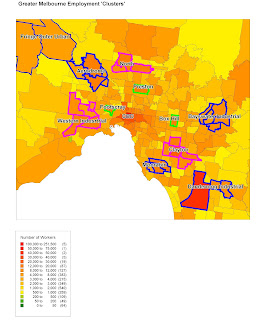 The Melbourne CBD is home to only 10.6% of all jobs throughout the metro region. Include the inner city locations of Dockland and Southbank sees this rise to just 14.3% of the metro region’s jobs.

Melbourne’s economy beyond the CBD is perhaps more evenly dispersed than Sydney or Brisbane although there are clear concentrations in certain regions. Close to the city centre, Box Hill is home to over 17,000 workers and a workforce density of nearly 2,500 per square kilometre. Likewise, Footscray and Preston, also close the city centre, are home to over 12,000 and 16,000 workers respectively (at densities of nearly 2,500 and 1,500 workers per klm).

The bigger suburban employment districts though are both to the south east of the city.  Clayton (including Oakleigh-Huntingdale, Mulgrave, Mount Waverly and Springvale) is home to 77,761 workers at an average worker density of 1552 per sq.klm. In Clayton itself there are over 3000 workers per sq.klm. Also to the south east is Dandenong, including Hallam and Narre Warren, which is home to 71,684 workers, at a lower density of 853 per sq.klm. Put these two regions together and the number is a considerable 150,000 jobs. That is getting close to scale to the Melbourne CBD itself (186,000 jobs).

These are big agglomerations of employment, spread over larger areas than the density found in the inner city, but undeniably large in their own right. Suggestions that outer suburban ‘sprawl’ will generate uncontrolled congestion as people try get to jobs in the inner city is simply not supported by the facts – because the scale and location of these suburban employment areas are generating more work commutes – at a factor of five to one – than the inner city.

Indeed, it may mean that further housing growth is needed on the outskirts to provide additional housing choice for people working in these areas. Increased housing density in inner city areas will find a market; but as a wholesale solution to housing across the metro regions of our capitals, it fails to provide choice in areas close to places where most people actually work.

It is also possible that a market for more diverse housing within and surrounding these employment areas is largely untapped, or even discouraged through planning schemes. Lower cost medium and higher density housing, along with detached housing, located in areas reasonably accessible to these employment areas, could be something for future planning schemes to consider.

A further implication is the need to consider increasing the allowable density of the employment lands. With many areas showing under 1,000 jobs per square kilometre, the efficiency of public infrastructure investment can tend to diminish. The very nature of many of the industries in these areas might prohibit higher density (eg warehousing and storage) but planning schemes which declare entire areas unsuitable for anything but light industrial or warehouse/storage might be denying a more efficient use of employment land and increased capital and social returns.

This also works on another level. It could make sense to allow more employment lands in largely dormitory residential areas. If the objective is to allow more choice and the opportunity for people to have shorter commutes, this notion of clear demarcation of housing and employment lands may need consideration. The entire western suburbs region of Brisbane, for example, has almost no employment, and workers have no choice but to clog the limited arterials out of their leafy dormitories in the daily trek to work.

Then there is the issue of transport: these suburban employment areas are not well served by public transport, nor can they be (we simply can’t afford it at present population levels). They are typically all in areas where private vehicle is the only practical choice for getting to and from work. Proponents of congestion charging, for example, may want to answer how their proposals could possibly impact on city wide congestion, other than to penalise the majority of a region’s workers (those with jobs in the suburbs) whose jobs are typically not flexible in choice of work hours and for whom a congestion charge would simply add to their cost of living without making any difference to their mode of transport.

Finally, is it valid to ask whether our planning schemes and infrastructure priorities have become distorted by an exaggerated focus on the needs of the CBDs and inner city regions? These are the seats of government and the headquarters of many large corporations, and also a cultural and social focus of our communities, so their primacy in many respects in justified. But equally, suburban employment regions which provide metropolitan and even state wide economic benefits at least equal to the CBD seem to receive comparatively little attention. To what extent, it seems fair to wonder, would our overall economic performance improve if the hard and soft infrastructure needs of these areas received equal emphasis by city planners?

Next: the types of jobs which keep most of us employed and the economy moving. 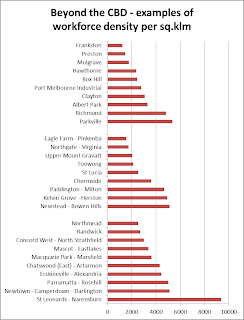